After a succesful trip to #DPC13 we've been a lot more active in the OS community. We've met so many great people since then, and we've even started our own little PHP user group! But that's a topic for a another post, this is about our first adventure as a conference sponsor...

PFCongres is a very accessible conference, mainly because of it's pricing. Tickets are sold between 30 and 40 euro for a full day with two tracks of talks plus even a unconference track this year. At any other conference, you'd be paying at least three times that amount! If you're ever interested in going to a conference and seeing what it's all about without selling your fridge and your cat to get there, this is the one. Just go, thank me later.

So for this conference, we didn't just go - we sponsored! After some deliberation we decided to sponsor the badges. A humble start, but we are after all a small company... All we did was pay the organizers and sent them our logo - they did an awesome job desining the badges. I kept mine as a souvenir :-)

As for the conference itsself, I must say I was a little worried beforehand. We had to ask a few times to receive the sponsorship contract; when we first tried to order our tickets, the automatic ticket system didn't work. The email said we'd receive response "at the end of July", while we where already well into September. All-in-all stuff just didn't seem too organized.

But I could not have been more wrong. Aside form those glitches, the conference was absolutely well run. I received my ticket confirmation by email the day before the tutorials, and again on the day of the tutorials, in case I lost the first one. Excellent service! grin WIFI was unavailable for the first 15 minutes of the tutorial day, but after that there where no problems with the internet. The location was good - lunch was very tasty - the atmosphere at the conference was superb!

A special mention must go to the saturday night social event. It was "offline games" and the game of choice - I had only heard about but never played this - was Cards Against Humanity. Now.. I'm not sure what happened, but at one point Ross Tuck ended up under the table, and we where all reduced to tears from laughing so hard at one point or another. I highly recommend playing Cards Against Humanity (if you can find it) with your friends, or perhaps with your in-laws if you don't want to get invited to the christmas parties anymore...

Here are some of my favorite talks summarized:

This talk describes some of the tools you can use to disect HTTP traffic, or even more low-level IP traffic. Lorna mentioned a few tools I already know and use like FireBug, Curl and WireShark, and a tool I did not know but also did not think of to use in this fashion, called CharlesProxy. She demonstrated how to use CharlesProxy to debug SSL traffic and how to rewrite/route mobile Apps to your development environment. Good stuff...

Codeception is a relatively new tool in the testing world, but we already like it so much! It ties acceptance, functional and unit testing into a single framework - which is also insanely easy to understand and fun to use.

This was an unscheduled unconference track, with an excellent format. The audience was challanged by the speakers with provocative statements - and the goals was to "win" eachother over with arguments. We even had a referee there who handed out points. This should be a recurring thing on different conferences, where the subjects can evolve and grow in every new session. Very refreshing!

Finally, during the closing statements, I was invited to the stage because of a tweet I had sent earlier:

And that resulted in the following two pictures... 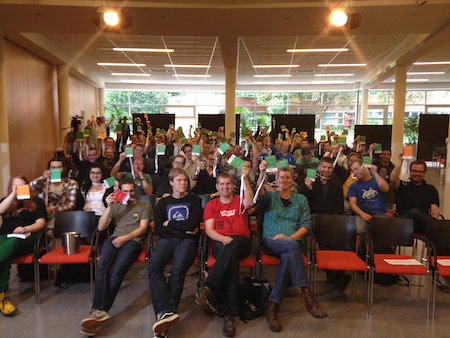 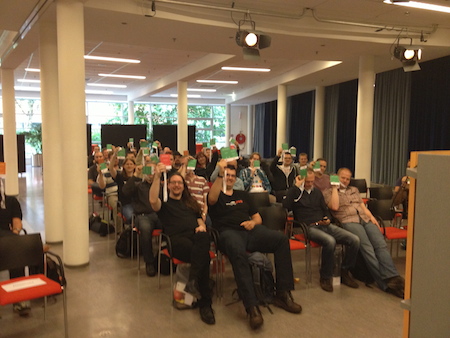 ...for which I thank the organization  and all the conference visitors who made it happen!